If Nietzsche Were a Narwhal: What Animal Intelligence Reveals About Human Stupidity (Hardcover) 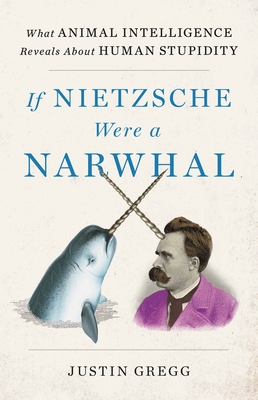 “I love the book, and everyone should read it.”
- Ryan Holiday

This funny, "extraordinary and thought-provoking" (The Wall Street Journal) book asks whether we are in fact the superior species. As it turns out, the truth is stranger—and far more interesting—than we have been led to believe.

If Nietzsche Were a Narwhal overturns everything we thought we knew about human intelligence, and asks the question: would humans be better off as narwhals? Or some other, less brainy species? There’s a good argument to be made that humans might be a less successful animal species precisely because of our amazing, complex intelligence.

All our unique gifts like language, math, and science do not make us happier or more “successful” (evolutionarily speaking) than other species. Our intelligence allowed us to split the atom, but we’ve harnessed that knowledge to make machines of war. We are uniquely susceptible to bullshit (though, cuttlefish may be the best liars in the animal kingdom); our bizarre obsession with lawns has contributed to the growing threat of climate change; we are sexually diverse like many species yet stand apart as homophobic; and discriminate among our own as if its natural, which it certainly is not. Is our intelligence more of a curse than a gift?

As scientist Justin Gregg persuasively argues, there’s an evolutionary reason why human intelligence isn’t more prevalent in the animal kingdom. Simply put, non-human animals don’t need it to be successful. And, miraculously, their success arrives without the added baggage of destroying themselves and the planet in the process.

In seven mind-bending and hilarious chapters, Gregg highlights one feature seemingly unique to humans—our use of language, our rationality, our moral systems, our so-called sophisticated consciousness—and compares it to our animal brethren. Along the way, remarkable tales of animal smarts emerge, as you’ll discover:

“A dazzling, delightful read on what animal cognition can teach us about our own mental shortcomings.”
- Adam Grant

What emerges is both demystifying and remarkable, and will change how you look at animals, humans, and the meaning of life itself.

Justin Gregg is a Senior Research Associate with the Dolphin Communication Project and an Adjunct Professor at St. Francis Xavier University where he lectures on animal behavior and cognition. Originally from Vermont, Justin studied the echolocation abilities of wild dolphins in Japan and The Bahamas. He currently lives in rural Nova Scotia where he writes about science and contemplates the inner lives of the crows that live near his home.

“If Nietzsche Were A Narwhal makes some extraordinary and thought-provoking points. It is not only engagingly written, but its controversial thesis is worth taking seriously… some of the cognitive concepts introduced… are nothing less than brilliant.”—David P. Barash, Wall Street Journal

“A dazzling, delightful read on what animal cognition can teach us about our own mental shortcomings. You won’t just tear through this book in one sitting—you’ll probably want to invite Justin Gregg over for dinner to spend more time inside his brilliant mind. This is one of the best debuts I’ve read in a long time, and I dare you to open it without rethinking some of your basic ideas about intelligence.”
—Adam Grant, #1 New York Times bestselling author of Think Again

“A snappy read: it left me wondering why we don't respect signals of intelligence from other species—and more deeply consider how our own intelligence works against us.”—Amy Brady, Scientific American

"I defy you not to be interested by this book--it finds a novel way of getting at very deep questions about who we are and what it means, and does so with clear-eyed compassion and a certain humor that softens the conclusion a bit."
—Bill McKibben, bestselling author of The End of Nature and Falter

“Enlightening! If Nietzsche Were a Narwhal is a hilarious and thrilling look at intelligence that asks: are humans really the best? Gregg will dazzle and sweep you off your feet with his detailed exploration of the animal kingdom and its many secrets. This is an absolute must-read.”—Wednesday Martin, bestselling author of Untrue and Primates of Park Avenue

“If Nietzsche Were a Narwhal is a book full of observations as surprising and off-the-beaten-path as its title. It’s scientifically very well informed. But it’s not a treatise—it’s a pleasure.”—Carl Safina, author of Beyond Words and Becoming Wild

“If Nietzsche Were a Narwhal is a funny, perceptive book that answers questions we've been told not to ask. Like many of the great sages, Justin Gregg uses animal stories to treat deep questions of consciousness and justice. The result is a deft field guide to the mixed blessings of intelligence and the real possibility that consciousness (and joy) exist perfectly well without it. “
—William Poundstone, author of How Do You Fight a Horse-Sized Duck?

“A sparkling and witty tour of the many minds we share this planet with. Nietzsche might be surprised to find himself contemplated in the company of beasts from narwhals to slugs — but the fascinating and detailed payoff of the cognitive lives of so many animals is immense.”
—Clive Wynne, author of Dog is Love

“What’s it like to be a bat, a bee, or a bed bug? In this enthralling book, Justin Gregg offers a window into the minds of other creatures, and debunks many of the myths of human exceptionalism. He makes the provocative argument that human thinking may be complex, but it is by no means superior - and its unique qualities could even be the cause of our species’ ultimate downfall. If Nietzsche Were a Narwhal is both a humbling and awe-inspiring read” —David Robson, author of The Intelligence Trap and The Expectation Effect

“This is an important book to read if you want to understand animals for what they are - not as cardboard cutouts, or as furry humans. Animal minds aren't in competition with us, although Gregg makes a good case that if they were, they would win hands down. The idea that human intelligence may be nothing more than a failed evolutionary dead end, gives humanity an important challenge to which we must rise.”—Arik Kershenbaum, author of The Zoologist’s Guide to the Galaxy

“We’ve heard that a mind is a terrible thing to waste, but have you ever considered that having a human mind is more a bane than a gift? Justin Gregg’s delightful and provocative book melds science with anecdote to explore that question. Read it, have your preconceptions challenged, and feel some humility. It might do you good.”—Jonathan Balcombe, author of Super Fly and What a Fish Knows

"Combining first-rate story-telling with the latest research on animal minds and cognitive psychology, If Nietzsche Were A Narwhal is the rare book that will cause readers to think deeply about big questions and moral issues and to laugh out loud on nearly every page. I loved it."—Hal Herzog, author of Some We Love, Some We Hate, Some We Eat

"A highly original take on the nature of intelligence across life forms. Simultaneously thought-provoking and delightfully humorous, Justin Gregg guides readers into an essential re-thinking of human exceptionalism. This is a welcome upending of all we have been molded to believe about human and other-than-human animal minds."  —Lyanda Lynn Haupt, author of Rooted and Mozart’s Starling

“If Nietzsche Were a Narwhal is an unusual, delightful, and entertaining book that will help us achieve a more precise understanding of human nature, counterintuitively by looking at our reflection in light of the clues of conscious behavior expressed by our fellow animals. I loved Dr. Gregg’s book because I learned quite a few interesting things from each chapter. As a scholar, I can offer no higher praise. Highly recommended.”—Oné R. Pagán, author of Drunk Flies and Stoned Dolphins: A Trip Through the World of Animal Intoxication

“If Nietzsche were a Narwhal is a beautiful, thought-provoking and often hilarious exploration of this planet’s different kinds of minds. Justin Gregg points out that while many of the hallmarks of human intelligence are also found, in some form, in animals from insects to narwhals, humans are by all means exceptional. But our intelligence is still constrained by our evolutionary history; we may be too intelligent for own good, and too stupid to look after our planet with a sufficiently long-term planning perspective. Gregg’s magnificent book is a poignant reminder that if we don’t raise our game fast, we might once again cede Earth to the rule of insects and other supposedly less intelligent creatures.”—Lars Chittka, author of The Mind of a Bee

"Entertaining work of pop science...[If Nietzsche Were a Narwhal] is a lighthearted conceit, and it leads to an enlightening tour of animal behavior...wonderfully accessible and charmingly narrated, this is a fascinating investigation of intellect and cognition."—Publishers Weekly

“Gregg shows how increased cognitive skills do not necessarily equate to success…This insightful book provides food for thought and lends credence to that notion… A fascinating take on human intelligence.”—Kirkus Book Reviews

"You’ll be laughing and contemplating up a storm in your chaise lounge during this enlightening book that compares the animal kingdom and humans. Dolphin scientist Justin Gregg makes you think about language, mortality, consciousness, and more—opening your eyes to animal parallels. Are we really as smart as we think?" —Men's Journal, Best Summer Reads

"A timely, thought-provoking and often sobering book that will make you look at humans, animals and the future of our planet with new eyes." —BookPage

"Tackling the topic of intelligence is no small feat. Science writer and researcher Gregg seems up for the challenge, though, relying on a combination of cognitive science, philosophy, and behavioral studies. The science here can be surprising....informative and thought-provoking."—Booklist

“I love the book, and everyone should read it.”—Ryan Holiday, host of The Daily Stoic podcast and New York Times bestselling author

"Would Nietzsche have been happier— and would the world overall have been a better place— had the philosopher been born some other species other than human? On its face, it sounds like an absurd question. But in If Nietzsche Were a Narwhal, scientist Justin Gregg convincingly argues that the answer is yes— and not only for Nietzsche, but for all of us.”—Undark Magazine

"In the best tradition of “popular science” writing, Gregg, an adjunct professor of biology at St Francis Xavier University…draw[s] on a vast body of research from medicine, animal behaviour, human behaviour, history, social studies and philosophy to explore a provocative question: a certain kind of intelligence separates humans from all other animals, but is it also leading us to annihilation? In seven quick chapters, Gregg unpacks a lot, and the book gets better as it goes along, becoming more and more thought-provoking.”—Money Control

"If Nietzsche Were A Narwhal is a must-read because it explains how we can save the world only if we exist in symbiosis with the thinking, feeling creatures that have had the misfortune of sharing the planet with humans, who turn out not to be as intelligent as they believe themselves to be." —Rafia Zakaria, The Baffler

"In often amusing, absurd detail, Gregg demonstrates time and again why animals may have the intellectual upper hand."—The Globe and Mail

"both demystifying and remarkable... will change how you look at animals, humans, and the meaning of life itself"—Next Big Idea Club