Granite Mountain: The Firsthand Account of a Tragic Wildfire, Its Lone Survivor, and the Firefighters Who Made the Ultimate Sacrifice (Paperback) 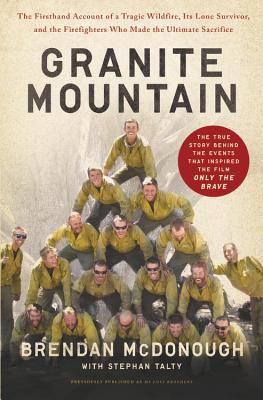 By Brendan McDonough, Stephan Talty (With)
$16.99
Available from our Distributors - Usually arrives in-store in 2-7 days

The true story behind the events that inspired the major motion picture Only the Brave.

A "unique and bracing" (Booklist) first-person account by the sole survivor of Arizona's disastrous 2013 Yarnell Hill Fire, which took the lives of 19 "hotshots" -- firefighters trained specifically to battle wildfires.

Brendan McDonough was on the verge of becoming a hopeless, inveterate heroin addict when he, for the sake of his young daughter, decided to turn his life around. He enlisted in the Granite Mountain Hotshots, a team of elite firefighters based in Prescott, Arizona. Their leader, Eric Marsh, was in a desperate crunch after four hotshots left the unit, and perhaps seeing a glimmer of promise in the skinny would-be recruit, he took a chance on the unlikely McDonough, and the chance paid off. Despite the crew's skepticism, and thanks in large part to Marsh's firm but loving encouragement, McDonough unlocked a latent drive and dedication, going on to successfully battle a number of blazes and eventually win the confidence of the men he came to call his brothers.

Then, on June 30, 2013, while McDonough -- "Donut" as he'd been dubbed by his team--served as lookout, they confronted a freak, 3,000-degree inferno in nearby Yarnell, Arizona. The relentless firestorm ultimately trapped his hotshot brothers, tragically killing all 19 of them within minutes. Nationwide, it was the greatest loss of firefighter lives since the 9/11 attacks.

Granite Mountain is a gripping memoir that traces McDonough's story of finding his way out of the dead end of drugs, finding his purpose among the Granite Mountain Hotshots, and the minute-by-minute account of the fateful day he lost the very men who had saved him. A harrowing and redemptive tale of resilience in the face of tragedy, Granite Mountain is also a powerful reminder of the heroism of the people who put themselves in harm's way to protect us every day.

Brendan McDonough is the only survivor of the 2013 fire at Yarnell. Today he is a public speaker and works with numerous nonprofits for veterans, police officers, firefighters, and emergency medical services. He lives in Prescott, Arizona.

Stephan Talty is the co-author of A Captain's Duty, which was the basis for the film Captain Phillips, and wrote the New York Times bestseller Empire of Blue Water. He lives in Montclair, New Jersey.

"[Granite Mountain]is a harrowing story of heroism in the face of natural disaster. It perfectly illustrates the kind of teamwork and camaraderie that informed the legendary squad of hotshots working to save--in this case--their hometown from utter destruction by fire. As perhaps the least likely guy ever to become a hotshot, Brendan McDonough more than lives up to his role after having been taken underwing by Granite Mountain leader Eric Marsh. That he has been able to keep on even keel as the Yarnell Hill Fire's lone survivor, having lost his mentor and his best friends, speaks volumes about his character and is a lasting testimony to the strength of his lost brothers."—Ed Viesturs, bestselling author of The Mountain: My Time on Everest

"Gear up with Brendan McDonough and his brothers in the elite Granite Mountain crew of wildland firefighters. Suspenseful and intense, [Granite Mountain] sears to the heart. Nonfiction writing at its best."—Stephen Templin, New York Times-bestselling author of SEAL Team Six and Trident's First Gleaming

"For an East Coast guy like me this book was a real education in wildfires, and the last few chapters were a terrifying lesson in how they can do the unpredictable. I was left with nothing but admiration for the Granite Mountain hotshot crew who put their lives on the line to protect the town of Yarnell."
—Michael Tougias, New York Times-bestselling co-author of The Finest Hours and So Close to Home

"This is a new breed of war story, of the citizen soldiers who stand between life and death, the forest and the fire. Through burnt moonscapes, in air choked with ash, they face flames as tall as towers and say, 'You shall not pass.' Powerful and lasting, this is a story of men who gave their all."
—Adam Makos, New York Times-bestselling author of A Higher Call

"With his insightful barbs aimed at our increasingly unrealistic ideal of life in the West and the many ways in which wildland firefighters are let down by those who fund and rely upon them, and brutally honest assessment of his struggles with PTSD, McDonough gives readers a unique and bracing literary experience.
—Booklist

"The dangers of battling fires on the ground and air are many and McDonough thrillingly explains the terror and panic of the fateful June 30, 2013 tragedy at Yarnell Hill, where all 19 of his crew members perished, leaving him with painful survivor's guilt. But strong support propelled him into a new life of grace and renewal."
—Publishers Weekly

"[Granite Mountain] is sure to captivate readers . . . Brendan McDonough had a very unusual story to tell, and he has done it well."—Bookreporter.com

McDonough's gut-wrenching survival story, written with the expert assistance of best-selling Talty (Escape from the Land of Snows, 2011) possesses a searing degree of emotion. With his insightful barbs aimed at our increasingly unrealistic ideal of life in the West and the many ways in which wildland firefighters are let down by those who fund and rely upon them, and brutally honest assessment of his struggles with PTSD, McDonough gives readers a unique and bracing literary experience.—Booklist