An Echo of Things to Come (The Licanius Trilogy #2) (Paperback) 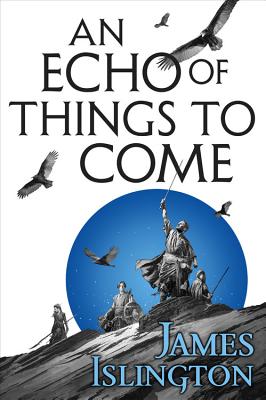 This is book number 2 in the The Licanius Trilogy series.

Davian has won a victory for the Augurs, but treachery surrounds him and his allies on all sides in the second book of the acclaimed Licanus Trilogy, in which "fans of Robert Jordan and Brandon Sanderson will find much to admire." (The Guardian)

Following a devastating attack, an amnesty has been declared for all Augurs -- finally allowing them to emerge from hiding and openly oppose the dark forces massing against the land of Andarra.

The Augur Davian and his new allies hurry north toward the ever-weakening Boundary, but fresh horrors along their path suggest that their reprieve may have come far too late.

The new Northwarden, his ally in the Capital, contends with assassins and politicians and uncovers a dangerous secret. Meanwhile, their compatriot Asha begins a secret investigation into the disappearance of the Shadows.

And Caeden races against time to fulfill a treacherous bargain, but as more and more of his memories return, he begins to realize that the two sides in this ancient war may not be as clear-cut as they first seemed. . .

"Islington's magic-soaked setting has plenty of opportunities for conflict between competing powers even as earth-shattering evil approaches. Epic fantasy fans will enjoy this dense, suspenseful adventure. "—Publishers Weekly on An Echo of Things to Come

"Reminiscent of Robert Jordan or Brandon Sanderson, Islington's writing is refreshingly fast paced, with a light and clever touch."—Booklist on An Echo of Things to Come

"Fans of this genre will find themselves immersed in the magical battles, suspense and backstabbing political intrigue."—RT Book Reviews on An Echo of Things to Come

"Islington's natural storytelling ability provides incessant plot twists and maintains a relentless pace...A promising page-turner from a poised newcomer who's well worth keeping tabs on."—Kirkus on The Shadow of What Was Lost

"The plot twists are unexpected, the world building is fascinating, and the fledgling love story is a charmer.... This sweeping and compelling epic is ripe for a sequel."—Booklist on The Shadow of What Was Lost

"The Shadow of What was Lost is an engrossing fantasy debut.... The twisting and complex storylines, fascinating characters and inventive magic make for a fun read packed with plenty of mystery."—Book Reporter