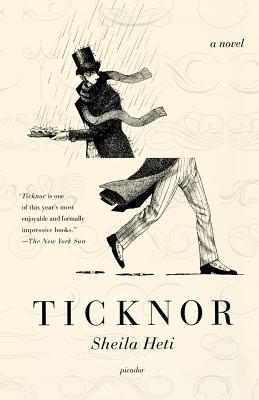 On Our Shelves Now
(This book cannot be returned.)

On a cold, rainy night, an aging bachelor named George Ticknor prepares to visit his childhood friend Prescott, a successful man who is now one of the leading intellectual lights of their generation. With a hastily baked pie in his hands, and a lifetime of guilt and insecurity weighing upon his soul, he sets out for the Prescotts' dinner party--a party at which he'd just as soon never arrive. Distantly inspired by the real-life friendship between the great historian William Hickling Prescott and his biographer, Ticknor is a witty, fantastical study of resentment; and a biting history of a one-sided friendship.

Sheila Heti is the author of several books of fiction and nonfiction, including Motherhood and How Should a Person Be?, which New York magazine deemed one of the “New Classics of the 21st century.” She was named one of “the New Vanguard” by the New York Times book critics, who, along with a dozen other magazines and newspapers, chose Motherhood as a Best Book of 2018. Her novels have been translated into twenty-four languages. She is the former Interviews Editor of The Believer magazine. She lives in Toronto.

“The rancorous, interminable friendship between a Great Man and his envious, self-pitying biographer drives this cleverly coiled narrative....As deliciously intimate and clue-riddled as a Poe story.” —Publishers Weekly

“Ticknor is one of this year's most enjoyable and formally impressive books.” —The New York Sun

“Sheila Heti's touch is confident. She builds a memorable world inside the tiny space of Ticknor's anxious imagination, and we barely miss the air outside.” —San Francisco Chronicle

“A pungent and hilarious study of bitterness and promise unfulfilled.” —Boldtype

“A par-ticularly satisfying puzzle: Heti's prose is the journey, and the destination.” —The Village Voice

“Heti packs more life and literary pleasure into Ticknor than most authors do in novels three or four times its length.” —David Bezmozgis, author of Natasha