A Place of Greater Safety: A Novel (Paperback) 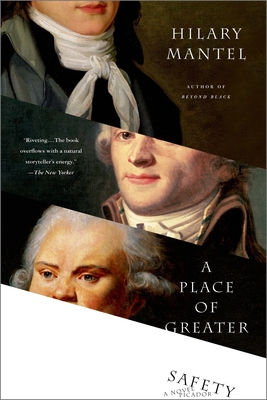 It is 1789, and three young provincials have come to Paris to make their way. Georges-Jacques Danton, an ambitious young lawyer, is energetic, pragmatic, debt-ridden--and hugely but erotically ugly. Maximilien Robespierre, also a lawyer, is slight, diligent, and terrified of violence. His dearest friend, Camille Desmoulins, is a conspirator and pamphleteer of genius. A charming gadfly, erratic and untrustworthy, bisexual and beautiful, Camille is obsessed by one woman and engaged to marry another, her daughter. In the swells of revolution, they each taste the addictive delights of power, and the price that must be paid for it.

Hilary Mantel was a renowned English writer who twice won the Booker Prize, for her best-selling novel Wolf Hall and its sequel, Bring Up the Bodies. The final novel of the Wolf Hall trilogy, The Mirror & the Light, debuted at #1 on the New York Times bestseller list and won worldwide critical acclaim. Mantel wrote seventeen celebrated books, including the memoir Giving Up the Ghost, and she was awarded the National Book Critics Circle Award for fiction, the Walter Scott Prize, the Costa Book Award, the Hawthornden Prize, and many other accolades. In 2014, Mantel was appointed Dame Commander of the Order of the British Empire (DBE). She died at age seventy in 2022.

“Mantel's writing is so exact and brilliant that, in itself, it seems an act of survival, even redemption.” —Joan Acocella, The New Yorker

“More people really need to get with the concept that Mantel is one of the best writers in England.” —Zadie Smith, author of On Beauty

“Brilliant, edgy historical fiction that captures the whiplash flux of the French Revolution with crisp immediacy on the page.” —The Seattle Times

“An epic of extraordinary detail and depth . . . [it] moves beyond the realm of an absorbing yarn into the arena of a literary masterpiece.” —Booklist