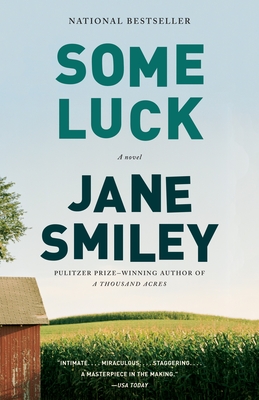 This is book number 1 in the The Last Hundred Years Trilogy: A Family Saga series.

1920, Denby, Iowa: Rosanna and Walter Langdon have just welcomed their firstborn son, Frank, into their family farm. He will be the oldest of five.

Each chapter in this extraordinary novel covers a single year, encompassing the sweep of history as the Langdons abide by time-honored values and pass them on to their children. With the country on the cusp of enormous social and economic change through the early 1950s, we watch as the personal and the historical merge seamlessly: one moment electricity is just beginning to power the farm, and the next a son is volunteering to fight the Nazis. Later still, a girl we’d seen growing up now has a little girl of her own.

The first volume of an epic trilogy from a beloved writer at the height of her powers, Some Luck starts us on a literary adventure through cycles of birth and death, passion and betrayal that will span a century in America.

Jane Smiley is the author of numerous novels, including A Thousand Acres, which was awarded the Pulitzer Prize, as well as five works of nonfiction and a series of books for young adults. In 2001 she was inducted into the American Academy of Arts and Letters, and in 2006 she received the PEN Center USA Lifetime Achievement Award for Literature. She lives in Northern California.

“Ravishing. . . . Reminiscent of the work of Willa Cather and Alice Munro. . . . Captur[es] the arc of personal and historical change in forthright prose that unexpectedly takes flight.” —O, The Oprah Magazine

“[Smiley] seemingly writes the way her idol Dickens did—as easily as if it were breathing.” —The New York Times

“Audaciously delicious. . . . Impeccably drawn. . . . Every character here steals our heart. . . . We read these lives, and we find our own.” —Chicago Tribune

“Sweeping. . . . Set[s] the minor catastrophes and victories of the family’s life against a backdrop of historical change.’” —The New Yorker

“The good news? This is the first of a trilogy. The bad news? We have to wait for the next volume.” —Entertainment Weekly (A-)

“Smiley draws a convincing portrait of life on a farm in the early 20th century: the way lives were buffeted by weather, the way the work never ended and how, for kids, there was no such thing as spare time. . . . Smiley gives her trilogy the sweep of history.” —NPR

“Smiley is that rare three-fer: meticulous historian, intelligent humorist and seasoned literary novelist. . . . She makes us see, in the kindest, gentlest way, that we’re a lot more wonderful, and a lot more screwed up—as a nation, as a people, as families, as individuals—than we think we are. . . . . Make[s] the reader count down the days to Book Two.” —Los Angeles Times

“The expansive American epic is Smiley's métier, and she's in top form with this multigenerational story of an Iowa farming family—sturdy sons, passionate daughters, a tough but tender existence—across the first half of the twentieth century.” —Time

“The Langdon family knows growth, diaspora, heartbreak, and passion over three decades. It’s breathtaking to realize that this novel is the first of a trilogy!” —The Philadelphia Inquirer

“Compelling. . . . Drawn with Smiley’s signature specificity and clear-eyed compassion. . . . No writer has ever captured the satisfactions and frustrations of the American farmer with more insight, humor, accuracy and grace than Smiley.” —More

“Unforgettable.  . . . What seems simple at first grows profound. . . . You don’t have to have been raised on an Iowa farm to think: That sounds like my grandmother, my aunt, my father, my brother. That sounds like us.” —Miami Herald

“From Pulitzer winner Smiley, a multi-generational saga about an Iowa farming family's shifting fortunes.” —People, “Best Books of the Fall”

“Marvellously evoked. . . . Smiley’s gifts as a storyteller are in full force from the first page.” —Financial Times

“An impressive accounting of family life. . . . With Some Luck and a return to the heartland, the remarkable Smiley just got a little more remarkable.” —Houston Chronicle

“An engaging read populated by sympathetic characters who take what life brings. It’s a look back at what feels like simpler times. . . As always, Smiley is a master of the telling detail.” —The Seattle Times

“Brilliant . . . Smiley is one of America’s most accomplished and wide-ranging novelists. . . . Demonstrates how events on an isolated, unsophisticated farm in the middle of the country represent and influence the larger story of America.” —Dallas Morning News

“Remarkable. . . . Midwestern farm country has proved fertile soil for fiction writers, and no one, perhaps, has cultivated it to such fine effect as Jane Smiley.” —Minneapolis Star Tribune

“What’s unusual about Some Luck is how closely it’s meant to mimic real life, and yet how important Smiley’s gifts as a novelist are to achieving that effect. . . . Smiley’s ability to sketch a scene, to bring to life the quiet incidents as well as the big ones . . . are what transform the family stories into literature.” —Kansas City Star

“Sumptuous . . . A meditation on the things we encounter in our lives that shape our personal histories. . . . Readers will find much enjoyment in her sharp prose and finely observed details.” —Milwaukee Journal Sentinel

“The wonderful first installment of Smiley’s The Last Hundred Years Trilogy, which tells the story of an Iowa farm family from 1920 to 2019. As far as I’m concerned, the next two cannot follow soon enough . . . Beautifully narrated . . . Extremely satisfying.” —Natalie Serber, The Oregonian

“Delightfully engaging, a novel full of pleasures both large and small.” —The Columbus Dispatch

“[A] tour de force. . . .  Wherever Smiley goes in Some Luck, most readers will willingly follow. Then wait, with bated breath, for her next steps.” —BookPage

“A wide-angle view of mid-century America. Told in beautiful, you-are-there language, the narrative lets ordinary events accumulate to give us a significant feel of life at the time. . . . Highly recommended; a lush and grounded reading experience.” —Library Journal (starred review)