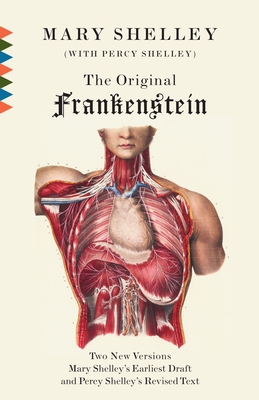 By Mary Shelley
$14.95
Available from our Distributors - Usually arrives in-store in 2-7 days

For the first time we can hear Mary’s sole voice, which is colloquial, fast-paced, and sounds more modern to a contemporary reader. We can also see for the first time the extent of Percy Shelley’s contribution—some 5,000 words out of 72,000—and his stylistic and thematic changes. His occasionally florid prose is in marked contrast to the directness of Mary’s writing. Interesting, too, are Percy’s suggestions, which humanize the monster, thus shaping many of the major themes of the novel as we read it today. In these two versions of Frankenstein we have an exciting new view of one of literature’ s greatest works.

Charles E. Robinson is a professor of English at the University of Delaware. He has published and lectured extensively on the English Romantic writers, especially Byron and the Shelleys. His books include Mary Shelley: Collected Tales and Stories; Mary Shelley's Prosperine and Midas and The Frankenstein Notebooks.

“Charles Robinson, more fi nely tuned to the authorship of Frankenstein than any scholar living or dead, has produced two versions of Mary Shelley’s prepublication manuscript: as she first wrote it, then as it was marked with Percy’s additions and alterations. With as much certainty and in as much detail as superhumanly possible, Robinson reanimates the beginnings of this vibrant novel in an authoritative, smartly accomplished, reader- friendly edition that will delight its fans no less than it will stimulate its students. An original work of imagination itself, The
Original Frankenstein, by illuminating the genesis of this novel, is now an invaluable part of its intriguing editorial history.” —Susan J. Wolfson, Professor of English, Princeton University and President, Association of Literary Scholars and Critics

“Mary Shelley’s Frankenstein was famously inspired by telling ghost stories with Percy Bysshe Shelley and Lord Byron during a cold, wet summer in the Swiss Alps. It continues to serve as shorthand for the dangers of reckless scientific advance, yet literary historians have never been able to agree on its origins. Could Mary Shelley, an unpublished 18-year-old, really have written the novel? Or was Frankenstein’s monster her future husband’s creation? . . . Charles E Robinson presents a convincing case for crediting the novel to ‘Mary (with Percy) Shelley’,
revealing the major changes PBS made to Mary’s first draft. . . . The novel the Shelleys wrote together represents a remarkable act of literary homage and collaboration and Charles E Robinson’s revealing new edition allows modern readers to be there at its creation. .” —The Independent (London)

“Th e novel’s textual instability is explored in the impressive introduction to Charles Robinson’s new edition. His honourable aim is not to give us another text of the novel we know—or think we know—but to strip away nearly two centuries of revision and appropriation in order to return to what he describes as the ‘original’ Frankenstein. . . . The value of Charles Robinson’s edition lies in the confi rmation of Mary Shelley’s assertion . . . that ‘Every thing must have a beginning—and that beginnings matter—and in its affirmation of community, cooperation and collaboration as fundamental to literary production.” —The Times Literary Supplement

“Thanks to the dogged textual work of Charles E. Robinson . . . readers will now be able to see for themselves what Mary wrote before she turned it over to Percy’s editorial ministrations. . . . [This] version of the novel . . . probably comes as close as it’s possible to get to the draft that Mary first handed Percy to read.” —The Chronicle of Higher Education