The Big Hurt: A Memoir (Hardcover) 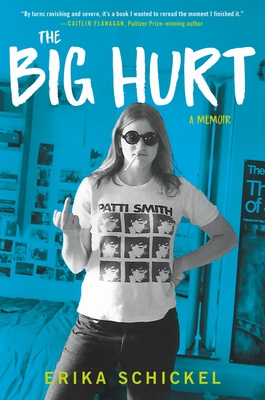 This complex memoir shows what it was like growing up in the shadow of a literary father and a neglectful mother, getting thrown out of boarding school after being seduced by a teacher, and all of the later-life consequences that ensue.

In 1982, Erika Schickel was expelled from her East Coast prep school for sleeping with a teacher. She was that girl—rebellious, precocious, and macking for love. Seduced, caught, and then whisked away in the night to avoid scandal, Schickel’s provocative, searing, and darkly funny memoir, The Big Hurt, explores the question, How did that girl turn out?

Schickel came of age in the 1970s, the progeny of two writers: Richard Schickel, the prominent film critic for TIME magazine, and Julia Whedon, a melancholy mid-list novelist. In the wake of her parents’ ugly divorce, Erika was packed off to a bohemian boarding school in the Berkshires.

The Big Hurt tells two coming-of-age stories: one of a lost girl in a predatory world, and the other of that girl grown up, who in reckoning with her past ends up recreating it with a notorious LA crime novelist, blowing up her marriage and casting herself into the second exile of her life.

The Big Hurt looks at a legacy of shame handed down through a maternal bloodline and the cost of epigenetic trauma. It shines a light on the haute culture of 1970s Manhattan that made girls grow up too fast. It looks at the long shadow cast by great, monstrously self-absorbed literary lives and the ways in which women pin themselves like beautiful butterflies to the spreading board of male ego.

Erika Schickel is the author of You're Not the Boss of Me: Adventures of a Modern Mom (2007). Her essays and criticism have appeared in the Los Angeles Times, The Los Angeles Review of Books, LA Weekly, Bust Magazine, Salon, The Daily Beast, HuffPost, The Chicago Tribune and more. She lives and writes in Los Angeles.

"I picked up Erika Schickel's memoir and the world disappeared for the next two days. I was transported and consumed by Schickel's hypnotic unspooling of her troubled, sexed-up adolescence and the way the legacy of that time followed her like a black dog into midlife. Beautifully written, intensely relatable, and fueled by incendiary fury and love, The Big Hurt belongs on the shelf with a small number of memoirs that rearranged my world-view and maybe even a few of my cells. I loved this book."—Claire Dederer, author of Love and Trouble

"One of the top five books I've ever read, don't remember what the other four were. Wowee."—Sandra Tsing Loh, author of The Madwoman in the Volvo

"The Big Hurt fulfills the promise of which too many memoirs fall short: it takes the vagaries and vicissitudes of the human heart and elevates them to the level of social, even political, inquiry. Erika Schickel is not just an interrogator of her own psyche but an interpreter of the times--the current era as well as the decades that led us here."—Meghan Daum, author of The Problem with Everything

"Who doesn't love a fallen woman story? Erika Schickel's The Big Hurt delivers that in spades, but this fierce, elegant memoir does so much more. Schickel's unraveling of her past, will make you rethink every assumption you hold about the nexus between sexual desire and power. The Big Hurt is a most timely read."—Annabelle Gurwitch, author of the New York Times bestseller I See You Made an Effort and Wherever You Go, There They Are

"I loved The Big Hurt. It's the story of a bad girl who grew up to be a good woman--until she felt the old itch. In the middle of marriage and motherhood, Erika Schickel pulled the pin from a deadly grenade and blew it all up. The Big Hurt tells us what it's like to fall dangerously in love when the timing is wrong and the children are young, and when the man in question has immolation on his mind. It's a glimpse into secret places, a school for scandal and a funeral pyre. By turns ravishing and severe, it's a book I wanted to reread the moment I finished it."—Caitlin Flanagan, author of Girl Land

"Savagely funny, fiercely intelligent, ingeniously constructed, The Big Hurt gripped me from start to finish. This is that rare memoir that offers both the deep narrative pleasures of a great novel and the psychological excavation evident in the best personal histories, from Cheryl Strayed's Wild to Claire Dederer's Love and Trouble."—Joanna Rakoff, New York Times bestselling author of My Salinger Year

"The Big Hurt is a dramatic departure from [Schickel's] last 'momoir' of edgily comic essays....With unflinching candor...The Big Hurt was 12 years in the writing, time she spent asserting her authentic voice and taking control of her own narrative, the good, the bad and the ugly."—Vanity Fair

"Sharp-tongued and darkly hilarious, [The Big Hurt] is also one of the more relentlessly honest, big-hearted reckonings with abuse to come out of the #MeToo era....What makes The Big Hurt so singularly rich and harrowing — what sets it apart from the troves of young girls’ coming-of-age stories set in a culture that primes them for sexual predation and emotional abuse — is that it percolated while Schickel was ensconced in a tumultuous, marriage-ending affair. The romance — with much-older celebrity crime-fiction writer Sam Spade (a pseudonym, though his identity is easily Googleable) — bears striking resemblance to the disastrous trysts of her youth: Spade is possessive, mercurial, and more interested in Schickel as a muse than as a partner. The various transgressions, humiliations, and traumas of her adolescence crackle with renewed urgency; she is reliving them as she writes....A kaleidoscopic portrait of life messily, complexly lived, told with equal parts unfettered rage, measured calm, and compassion."—The Los Angeles Review of Books

"Schickel is a fluid writer and can be funny, occasionally hilarious… her narrative timing is often spot-on….The scenes in which Schickel digs the deepest leave the longest-lasting impact....A flawed yet affecting portrait of a vicious, repetitive cycle."—Kirkus Reviews

“As much as The Big Hurt is about sex and femininity, it also hinges on larger themes of family, both given and chosen….By unpacking her own guilt and grief, Schickel captures many of the trials and anxieties that remain tightly stowed away for middle-aged women….The Big Hurt swings between moments of humorous frankness and complex depictions of trauma with skillful balance.”
—Bust magazine