What Are Biblical Values?: What the Bible Says on Key Ethical Issues (Hardcover) 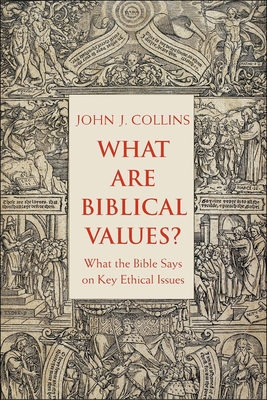 By John Collins
$32.20
Available from our Distributors - Usually arrives in-store in 2-7 days

What does the Bible actually say about many of today's most contentious moral issues?

“For drawing attention to the relevant scriptures and for guidance in recognizing what are and aren’t valid interpretations of them, Collins’ pertinent brief is beyond praiseworthy.”—Booklist (starred review)

“Collins pours a lifetime of scholarship into this study of what the Bible says about controversial ethical topics. It’s highly readable, and it’s honest.”—Jane McBride, Christian Century

Many people today claim that their positions on various issues are grounded in biblical values, and they use scriptural passages to support their claims. But the Bible was written over the course of several hundred years and contains contradictory positions on many issues. The Bible seldom provides simple answers; it more often shows the complexity of moral problems. Can we really speak of “biblical values”?

In this eye-opening book, one of the world’s leading biblical scholars argues that when we read the Bible with care, we are often surprised by what we find. Examining what the Bible actually says on a number of key themes, John Collins covers a vast array of topics, including the right to life, gender, the role of women, the environment, slavery and liberation, violence and zeal, and social justice. With clarity and authority, he invites us to dramatically reimagine the basis for biblical ethics in the world today.

John J. Collins is Holmes Professor of Old Testament Criticism and Interpretation at Yale Divinity School. He has published widely on the subjects of apocalypticism, wisdom, Hellenistic Judaism, and the Dead Sea Scrolls.

“For drawing attention to the relevant scriptures and for guidance in recognizing what are and aren’t valid interpretations of them, Collins’ pertinent brief is beyond praiseworthy.”—Ray Olson, Booklist (starred review)

“Collins pours a lifetime of scholarship into this study of what the Bible says about controversial ethical topics. It’s highly readable, and it’s honest . . . Collins addresses difficult topics head on. His aim is to summarize what the biblical text actually says, in its own cultural context, with all of its complexity and contradiction.”—Jane McBride, Christian Century

“A thoughtful, balanced, and engaging book, a must-read for anyone who wishes to understand what biblical values really are.”—Leslie J. Hoppe, Bible Today

“A wise, insightful, and often surprising discussion of the relevance (and sometimes irrelevance) of the Bible for significant ethical debates of our day.”—Bart D. Ehrman, University of North Carolina at Chapel Hill

“In this engaging study of the conflicting and discordant values found in the Bible, one of the world’s foremost scholars of the Hebrew Bible confronts us with hard truths. Brimming with promise for ecumenical and inter‑religious conversations, his book offers a constructive program for wrestling with this tradition.”—Candida Moss, author of Divine Bodies


“This remarkable volume takes on the considerable task of determining what the Bible actually says about various issues of contemporary concern apart from the facile and tendentious rhetoric that surrounds them. The author examines these topics in an evenhanded way, then turns to the text itself, its context, and other relevant authorities. This is an excellent, balanced, and important book.”—Randall Balmer, Dartmouth College

“Too many people think they know what biblical values are without actually having read the Bible. In this wise and insightful book, John Collins shows us what it really says on contested moral issues.”—John Barton, University of Oxford

“With accessible prose and provocative conclusions, What Are Biblical Values? offers a concise account of how to read (and not read) biblical texts in relation to a host of contested issues. It challenges readers to transcend the division between historical studies and normative ethics.”—Eric Gregory, Princeton University