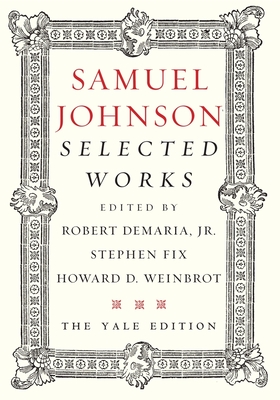 A one‑volume collection of the prose and poetry of eighteenth‑century Britain's pre‑eminent lexicographer, critic, biographer, and poet Samuel Johnson

Samuel Johnson was eighteenth‑century Britain’s preeminent man of letters, and his influence endures to this day. He excelled as a moral and literary critic, biographer, lexicographer, and poet. This anthology, designed to make Johnson’s essential works accessible to students and general readers, draws its texts from the definitive Yale Edition of the Works of Samuel Johnson. In most cases, texts are included in full rather than excerpted. The anthology includes many essays from The Rambler and other periodicals; Rasselas; the prefaces to Johnson’s Dictionary and his edition of Shakespeare; the complete Lives of Cowley, Milton, Pope, Savage, and Gray, as well as generous selections from A Journey to the Western Islands of Scotland. Some parts are arranged thematically, allowing readers to focus on such topics as religion, marriage, war, and literature. The anthology includes a biographical introduction, and its ample annotation updates and enlarges the commentary in the YaleEdition.

“A crowning achievement, reflecting an actual improvement on many of the volumes in terms of scholarship, including currency of materials, accuracy, and skill in compression.”—Pat Rogers, University of South Florida

“An essential and judicious selection of Johnson’s writings compiled by three distinguished Johnson scholars that will enable readers to sample his compelling prose style and his probing and deeply original intellect. “—John Richetti University of Pennsylvania

“Wisely selected, edited, and annotated, this volume presents the ideal collection for the 21st century of works by the 18th century’s most inspiriting author.” —John Sitter, University of Notre Dame, emeritus

“Ideal for the classroom and for people who can't imagine how to approach Johnson. The impossible selection of topics is boldly made: a myriad launch-pads for seriously enquiring thought.” —Isobel Grundy, University of Alberta

"This selection from the recently-completed Yale Edition of the writings of the last great figure of the English Augustan tradition brings Johnson’s finest works together in a single, masterfully-annotated volume. A triumph of scholarly editing for the general public."—Claude Rawson, Yale University