Can I Believe?: Christianity for the Hesitant (Hardcover) 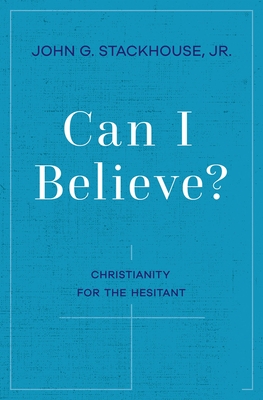 By John G. Stackhouse
$24.95
On Our Shelves Now - Please call to confirm stock for hot titles

Maybe Christianity is actually true. Maybe it is what believers say it is. But at least two problems make the thoughtful person hesitate. First, there are so many other options. How could one possibly make one's way through them to anything like a rational and confident conclusion? Second, why do so many people choose to be Christian in the face of so many reasons not to be Christian? Yes, many people grow up in Christian homes and in societies, but many more do not. Yet Christianity has become the most popular religion in the world. Why? This book begins by taking on the initial challenge as it outlines a process: how to think about religion in a responsible way, rather than settling for such soft vagaries as "faith" and "feeling". It then clears away a number of misunderstandings from the basic story of the Christian religion, misunderstandings that combine to domesticate this startling narrative and thus to repel reasonable people who might otherwise be intrigued. The second half of the book then looks at Christian commitment positively and negatively. Why do two billion find this religion to be persuasive, thus making it the most popular "explanation of everything" in human history? At the same time, how does Christianity respond to the fact that so many people find it utterly implausible, especially because so many Christians insist that theirs is the only way to God and because of the problem of evil that seems to undercut everything Christianity asserts? Grounded in scholarship but never ponderous, Can I Believe? refuses to dodge the hard questions as it welcomes the intelligent inquirer to give Christianity at least one good look.

John Stackhouse is an award-winning scholar, teacher, and public communicator. He was born in Canada and raised in southwestern England and northern Ontario. He graduated BA from Queen's University, MA from Wheaton Graduate School, and PhD from the University of Chicago. He has taught at universities in Canada and the United States, and currently holds the Samuel J. Mikolaski Chair of Religious Studies at Crandall University in eastern Canada. Professor Stackhouse has lectured at Harvard, Yale, Stanford, Edinburgh, Hong Kong, Fudan, Otago, and many other universities. His voice has been featured in a wide range of media, from the New York Times to the Washington Post to the Times Literary Supplement, and from ABC News in the USA to ABC News in Australia, as well as in most major Canadian media.