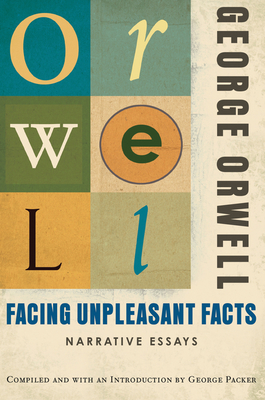 George Orwell was first and foremost an essayist, producing throughout his life an extraordinary array of short nonfiction that reflected--and illuminated--the fraught times in which he lived. "As soon as he began to write something," comments George Packer in his foreword, "it was as natural for Orwell to propose, generalize, qualify, argue, judge--in short, to think--as it was for Yeats to versify or Dickens to invent."

Facing Unpleasant Facts charts Orwell's development as a master of the narrative-essay form and unites such classics as "Shooting an Elephant" with lesser-known journalism and passages from his wartime diary. Whether detailing the horrors of Orwell's boyhood in an English boarding school or bringing to life the sights, sounds, and smells of the Spanish Civil War, these essays weave together the personal and the political in an unmistakable style that is at once plainspoken and brilliantly complex.

GEORGE ORWELL (1903–1950) was born in India and served with the Imperial Police in Burma before joining the Republican Army in the Spanish Civil War. Orwell was the author of six novels, including 1984 and Animal Farm, as well as numerous essays and nonfiction works.

GEORGE PACKER is a staff writer for The New Yorker and author of The Assassin's Gate: America in Iraq and other works. He lives in Brooklyn.