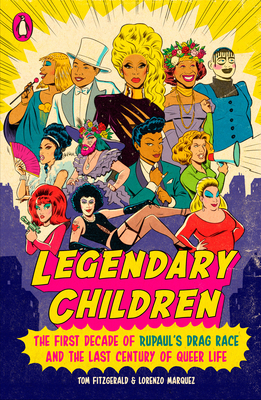 A definitive deep-dive into queer history and culture with hit reality show RuPaul's Drag Race as a touchstone, by the creators of the pop culture blog Tom and Lorenzo

From the singular voices behind Tom and Lorenzo comes the ultimate guide to all-things RuPaul's Drag Race and its influence on modern LGBTQ culture. Legendary Children centers itself around the idea that not only is RuPaul's Drag Race the queerest show in the history of television, but that RuPaul and company devised a show that serves as an actual museum of queer cultural and social history, drawing on queer traditions and the work of legendary figures going back nearly a century. In doing so, Drag Race became not only a repository of queer history and culture, but also an examination and illustration of queer life in the modern age. It is a snapshot of how LGBTQ folks live, struggle, work, and reach out to one another--and how they always have--and every bit of it is tied directly to Drag Race. Each chapter is an examination of a specific aspect of the show--the Werk Room, the Library, the Pit Crew, the runway, the Untucked lounge, the Snatch Game--that ties to a specific aspect of queer cultural history and/or the work of certain legendary figures in queer cultural history.

The bloggers behind the massively popular site Tom and Lorenzo, Tom Fitzgerald and Lorenzo Marquez offer their unique take on all things fashion and pop culture-related every day to an audience of more than seven million readers a month. They've appeared three times on Sundance Channel's All on the Line, with Joe Zee, in which Joe called them "two of the most important fashion bloggers today," made a dozen-plus appearances on Sirius XM Radio's "The Derek & Romaine Show," and have been profiled, quoted or interviewed by The New York Times, The Wall Street Journal, the Los Angeles Times, National Public Radio, Entertainment Weekly, People, Vanity Fair, Elle, Rolling Stone, the Daily Telegraph, The Huffington Post, Slate, The Guardian, and Newsweek, among others. They live in Philadelphia.

“As a longtime, devoted reader and admirer of Tom and Lorenzo's writing, I couldn't be more thrilled to have such a detailed, comprehensive analysis of the best reality television show ever made on Planet Earth (RuPaul's Drag Race). I adore Legendary Children, not just because I am in it, but for its thoroughly entertaining catalogue of television, drag and queer history.”
—Katya Zamolodchikova, co-author of Trixie and Katya’s Guide to Modern Womanhood

“Using Drag Race's prominence as a mirror to reflect drag brilliance through the ages, this must-read book articulately celebrates the icons—both well-known and under-appreciated—who made magic with a mascara wand and whose finely glossed lips were always worth reading. Like this book!”
—Michael Musto

“Informative, entertaining, melodramatic in its obsessiveness, and written with equal amounts of insight and wit, the book serves as a commemorative archive of drag in American life.”
—Kirkus

“It's officially been a decade since RuPaul's Drag Race aired its first season, and a groundbreaking queer phenomenon was born. In celebration of this milestone, Tom Fitzgerald and Lorenzo Marquez wrote Legendary Children, which explores queer history and culture and talks about how RuPaul's hit reality show contributed to this rich tradition.”
—Cosmopolitan

“Part loving homage to the show, part history lesson, think of it as the queer education you didn't get in public school.”
—Evan Ross Katz, Paper

“Legendary Children arrives at just the right time — both because season 12 of 'Drag Race' just premiered and because the world needs authenticity in its stories. Fitzgerald and Marquez deliver that, giving readers an insight into the important but overlooked people who made our current moment possible.”
—Ryan Carey-Mahoney, The Washington Post

“[Legendary Children] turn[s] ‘Drag Race’s’ challenges and recurring elements (the Pit Crew, Snatch Game, etc.) into a deceptively simple framing device for a nuanced exploration of the gender-bending figures, insider lingo and significant milestones in queer history to which the show owes its existence…For a book about reality television, Legendary Children is unusually ambitious — an obsessively detailed portrait of modern LGBTQ life and how it came to be.”
—Katie Wudel, The Los Angeles Times

“It’s a delightful and important look at the way past queens and other queer folk have shaped not only drag but also queer life as we know it. Fitzgerald and Marquez have crafted a world in which drag queens are heroes - fighting for equality and looking fierce and fabulous while doing it. It’s a history well told, one that is approachable and enjoyable for all to digest. The prose is upbeat and makes a reader as excited about the history as the authors so clearly are.”
—Molly Sprayregen, Associated Press

“The sharp, smart playfulness…encapsulates the tremendous appeal of Legendary Children: great seriousness of purpose set off by a mischievous, even lascivious wink. Using Drag Race as a framework to explore many, many corners of LGBTQ+ life is something of a stroke of genius, making this an excellent piece of TV criticism as well as an exploration of history.”
—Allison Shoemaker, AV Club

“The book seamlessly weaves LGBTQ history into the 'Drag Race' present, and gives readers a deep dive into the background of the show’s challenges, and what they mean in the history of queer life.”
—Carole Horst, Variety

“RuPaul’s Drag Race fans will salivate over this definitive deep-dive and ultimate guide to all-things Drag Race and how the hit show has influenced modern LGBTQ culture.”
—Queerty

“Legendary bloggers Tom and Lorenzo trace the last century of queer revolutionary activity through the art of drag. The history of acceptance of queer people has waxed and waned, and they guide us through the big cultural moments that allowed greater visibility and took rights away at the same time.”
—Julia Rittenberg, Book Riot

“This book cleverly weaves aspects of RuPaul’s Drag Race – lip syncing, the Snatch Game, serving lewks – with the queer cultural history behind the show. In the introduction, Tom Fitzgerald and Lorenzo Marquez style bloggers Tom + Lorenzo, encourage readers to Google as they go, diving into Internet rabbit holes on various aspects of queer culture outlined in the book. Reading this book led me to discover a treasure trove of YouTube videos, documentaries and Wikipedia pages that I never would have found on my own.”
—Jessica Reedy, producer, Pop Culture Happy Hour