The Wars of the Roses: The Fall of the Plantagenets and the Rise of the Tudors (Paperback) 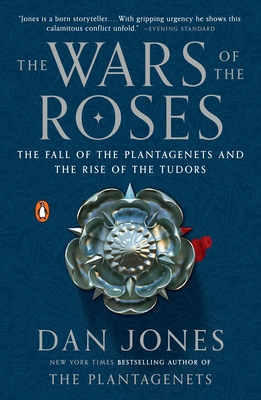 The crown of England changed hands five times over the course of the fifteenth century, as two branches of the Plantagenet dynasty fought to the death for the right to rule. In this riveting follow-up to The Plantagenets, celebrated historian Dan Jones describes how the longest-reigning British royal family tore itself apart until it was finally replaced by the Tudors.

Some of the greatest heroes and villains of history were thrown together in these turbulent times, from Joan of Arc and Henry V, whose victory at Agincourt marked the high point of the medieval monarchy, to Richard III, who murdered his own nephews in a desperate bid to secure his stolen crown. This was a period when headstrong queens and consorts seized power and bent men to their will. With vivid descriptions of the battles of Towton and Bosworth, where the last Plantagenet king was slain, this dramatic narrative history revels in bedlam and intrigue. It also offers a long-overdue corrective to Tudor propaganda, dismantling their self-serving account of what they called the Wars of the Roses.

“If you’re a fan of Game of Thrones or The Tudors then Dan Jones’ swashbucklingly entertaining slice of medieval history will be right up your alley… Every bit as entertaining and readable as his previous blockbuster The Plantagenets.” – Daily Express

Dan Jones is the author of The Plantagenets: The Warrior Kings and Queen Who Made England, a #1 international bestseller and New York Times bestseller, and Wars of the Roses, which charts the story of the fall of the Plantagenet dynasty and improbable rise of the Tudors. He writes and presents the popular Netflix series “Secrets of Great British Castles” and appeared alongside George R.R. Martin in the DVD for Game of Thrones to discuss its historical antecedents. He is also the author of Magna Carta: The Birth of Liberty and Summer of Blood: England’s First Revolution and is working on a history of the Knights Templar due out in September 2017.

Praise for The Wars of the Roses

“Exhilarating, epic, blood-and-roses history. There are battles fought in snowstorms, beheadings, jousts, clandestine marriages, spurious genealogies, flashes of chivalry and streaks of pure malevolence. . . .Jones’s material is thrilling, but it is quite a task to sift, select, structure, and contextualize the information. There is fine scholarly intuition on display here and a mastery of the grand narrative; it is a supremely skillful piece of storytelling.”
—The Sunday Telegraph

“Jones’s greatest skill as a historical writer is to somehow render sprawling, messy epochs such as this one into manageable, easily digestible matter; he is keenly tuned to what should be served up and what should be omitted. And he still finds rooms for the telling anecdote and vivid descriptive passage. It makes for an engrossing read and a thoroughly enjoyable introduction to the Lancastrian-Yorkist struggle.”
—The Spectator

“If you’re a fan of Game of Thrones or The Tudors then Dan Jones’ swashbucklingly entertaining slice of medieval history will be right up your alley… Every bit as entertaining and readable as his previous blockbuster The Plantagenets.”
– Daily Express

“Jones is a born storyteller, peopling the terrifying uncertainties of each moment with a superbly drawn cast of characters and powerfully evoking the brutal realities of civil war. With gripping urgency, he shows this calamitous conflict unfold.”
—The Evening Standard

“Jones tells a good story. That is a good thing, since storytelling has gone out of favor among so many historians. . .  He admits that the era is at times incomprehensible, yet he manages to impose upon it sufficient order to render this book both edifying and utterly entertaining. His delightful wit is as ferocious as the dreadful violence he describes.”
—The Times (London)

“A fine new history . . . Tautly structured, elegantly written, and finely attuned to the values and sensibilities of the age, The Wars of the Roses is probably the best introduction to the conflict currently in print.”
—The Mail on Sunday

“It’s not often that a book manages to be both scholarly and a page-turner, but Jones succeeds on both counts in this entertaining follow-up to his bestselling The Plantagenets. . . He sets a new high-water mark in the current revisionism of the Tudor era.”
—Publishers Weekly (starred review)