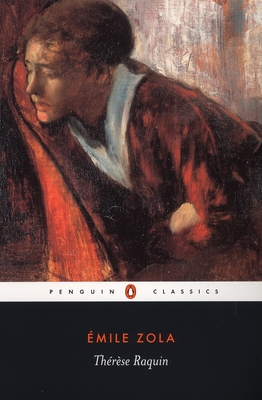 In a dingy apartment on the Passage du Pont-Neuf in Paris, Thérèse Raquin is trapped in a loveless marriage to her sickly cousin, Camille. The numbing tedium of her life is suddenly shattered when she embarks on a turbulent affair with her husband’s earthy friend Laurent, but their animal passion for each other soon compels the lovers to commit a crime that will haunt them forever. Thérèse Raquin caused a scandal when it appeared in 1867 and brought its twenty-seven-year-old author a notoriety that followed him throughout his life. Zola’s novel is not only an uninhibited portrayal of adultery, madness, and ghostly revenge, but also a devastating exploration of the darkest aspects of human existence.

Robin Buss's translation superbly conveys Zola's fearlessly honest and matter-of-fact style, combining fidelity to Zola's idiosyncrasies with easy fluency in English. This edition also includes an introduction discusses Zola's life and literary career and the influence of art, literature, and science on his writing, as well as the preface to the author's second edition of 1868, a chronology, suggestions for further reading, and notes.

Emile Zola (1840—1902) was born in Paris and worked as a journalist before turning to fiction. With the publication of L’Assommoir, he became the most famous writer in France. His work has influenced authors from August Strindberg to Theodore Dreiser to Tom Wolfe. Zola was nominated for the first two Nobel Prizes in Literature.

Robin Buss is a writer and translator who works for the Independent on Sunday and as television critic for The Times Educational Supplement. He studied at the University of Paris, where he earned a degree and a doctorate in French literature. He is part-author of the article “French Literature” in the Encyclopaedia Britannica and has published critical studies of works by Vigny and Cocteau and three books on European cinema, The French Through Their Films (1988), Italian Films (1989), and French Film Noir (1994). He has also translated a number of volumes for Penguin Classics.