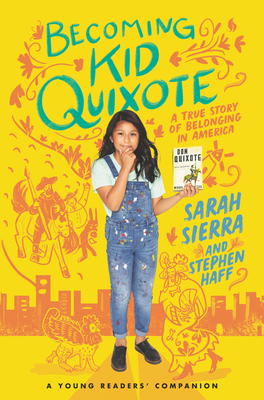 A young readers’ companion to the adult memoir Kid Quixotes by Stephen Haff.

Narrated by one extraordinary ten-year-old girl, this inspiring memoir tells the story of a daughter of Mexican American immigrants who finds her voice through the power of words and performance of Cervantes’ Don Quixote.

When a shy girl named Sarah Sierra first joins an after-school program in her neighborhood, she never expects to travel back in time and discover the words of Miguel de Cervantes. But at Still Waters in a Storm, a teacher named Stephen and a group of kids have pushed together tables piled high with books so they can gather round to talk about and translate Cervantes’ classic, Don Quixote de La Mancha.

They begin to reimagine Don Quixote—the story of an idealistic dreamer from Spain who traveled around trying to right the world’s wrongs—as the story of a group of modern-day kids from immigrant families in Brooklyn.

The stories the kids write in class become a musical play—expressing the plight of today’s immigrants and using Quixote as inspiration. And Sarah, once very shy, soon will play the leading role as Kid Quixote.

Perfect for fans of I Am Malala, Dear America, and The Freedom Writers Diary, this stirring true story will inspire you to imagine, to speak up, and to sing out.

Sarah Sierra is a student, writer, and actor. In 2015, at the age of six, she joined an after-school program called Still Waters in a Storm. Sarah has been a founding member of the Kid Quixotes since 2016 and plays the lead role in The Traveling Serialized Adventures of Kid Quixote. She loves to tell imaginative and creative stories that will make you believe anything is possible.

Stephen Haff is the founder of Still Waters in a Storm, a one-room school serving Spanish-speaking immigrant children in Bushwick, Brooklyn. Previously, he taught English at a public school in Bushwick for nearly a decade. He earned his MFA in Theater Studies at Yale, and has made a living directing plays and writing essays for the Village Voice and other publications. Stephen lives in Queens with his wife, children’s book author Tina Schneider, and their three children.

"Sarah’s story is a beautiful representation of one young Mexican American girl’s journey to claim her identity. This important book spotlights a community using the arts to break down social borders." — School Library Journal

"Empathetic and inspiring account of the imagination, triumphs, and worries of a child of immigrants. A tender, inspiring, and courageous true story."
— Kirkus Reviews

"Sara shares how her experiences and performances have given her the confidence to get past her shyness and speak up about issues important to her community, such as immigration and deportations." — Booklist

"In her own, big hearted voice, Sarah tells a story filled with strength, hope and love. The Quixote Kids are creating a new world with the power of books, music, theatre and family. Their motto: Everyone listens to Everyone. As soon as I finished reading...I wanted to start reading it all over again." — Rebecca Chase, author of June Sparrow and The Million Dollar Penny