All the Ways We Said Goodbye: A Novel of the Ritz Paris (Paperback) 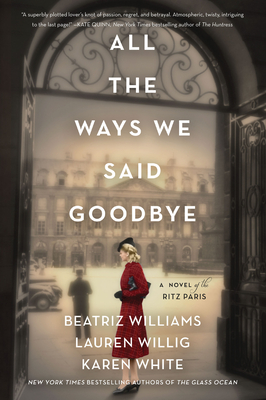 The New York Times bestselling authors of The Glass Ocean and The Forgotten Room return with a glorious historical adventure that moves from the dark days of two World Wars to the turbulent years of the 1960s, in which three women with bruised hearts find refuge at Paris’ legendary Ritz hotel.

The heiress . . .
The Resistance fighter . . .
The widow . . .
Three women whose fates are joined by one splendid hotel

France, 1914. As war breaks out, Aurelie becomes trapped on the wrong side of the front with her father, Comte Sigismund de Courcelles. When the Germans move into their family’s ancestral estate, using it as their headquarters, Aurelie discovers she knows the German Major’s aide de camp, Maximilian Von Sternburg. She and the dashing young officer first met during Aurelie’s debutante days in Paris. Despite their conflicting loyalties, Aurelie and Max’s friendship soon deepens into love, but betrayal will shatter them both, driving Aurelie back to Paris and the Ritz— the home of her estranged American heiress mother, with unexpected consequences.

France, 1942. Raised by her indomitable, free-spirited American grandmother in the glamorous Hotel Ritz, Marguerite “Daisy” Villon remains in Paris with her daughter and husband, a Nazi collaborator, after France falls to Hitler. At first reluctant to put herself and her family at risk to assist her grandmother’s Resistance efforts, Daisy agrees to act as a courier for a skilled English forger known only as Legrand, who creates identity papers for Resistance members and Jewish refugees. But as Daisy is drawn ever deeper into Legrand’s underground network, committing increasingly audacious acts of resistance for the sake of the country—and the man—she holds dear, she uncovers a devastating secret . . . one that will force her to commit the ultimate betrayal, and to confront at last the shocking circumstances of her own family history.

France, 1964. For Barbara “Babs” Langford, her husband, Kit, was the love of her life. Yet their marriage was haunted by a mysterious woman known only as La Fleur. On Kit’s death, American lawyer Andrew “Drew” Bowdoin appears at her door. Hired to find a Resistance fighter turned traitor known as “La Fleur,” the investigation has led to Kit Langford. Curious to know more about the enigmatic La Fleur, Babs joins Drew in his search, a journey of discovery that that takes them to Paris and the Ritz—and to unexpected places of the heart. . . .

Beatriz Williams is the bestselling author of thirteen novels, including Her Last Flight, The Summer Wives, and The Golden Hour, as well as All the Ways We Said Goodbye, cowritten with Lauren Willig and Karen White. A native of Seattle, she graduated from Stanford University and earned an MBA in finance from Columbia University. She lives with her husband and four children near the Connecticut shore, where she divides her time between writing and laundry.

Lauren Willig is the New York Times and USA Today bestselling author of twenty novels, including The Summer Country, The Ashford Affair, and The English Wife. She lives in New York City with her husband and family.

Karen White is a New York Times and USA Today bestselling author of twenty-five novels, including Dreams of Falling and The Night the Lights Went Out. She currently writes what she refers to as “grit lit”—Southern women’s fiction—and has also expanded her horizons into writing a mystery series set in Charleston, South Carolina. She is a graduate of the American School in London and has a BS in management from Tulane University. When not writing, she spends her time reading, singing, and avoiding cooking. She has two grown children and currently lives near Atlanta, Georgia, with her husband and two spoiled Havanese dogs.

"ALL THE WAYS WE SAID GOODBYE is a superbly plotted lover's knot of passion, regret, and betrayal. Willig, Williams, and White expertly spin three narrative threads across two wars and three generations, grounding their trio of very different heroines in the gilded luxury of the Paris Ritz—a place where anything can happen, even a decades-deferred second chance. Atmospheric, twisty, intriguing to the last page!" — KATE QUINN, New York Times Bestselling Author of The Alice Network

“A sweeping historical novel about the strength of women who find themselves in impossible situations.” — Popsugar

"The Ws have done it again! Combining meticulous research with elegant prose, the result is a captivating book of love and betrayal, loss and redemption as timeless and magnificent as the legendary Ritz itself." — Pam Jenoff, New York Times bestselling author of The Orphan’s Tale

“All three of these “team W” writers create engaging characters and complex relationships while setting a tone that matches the story’s time period…The twist at the center of the story is worth the price of admission on its own. A great choice for anyone looking for clever historical fiction with plenty of drama, action, and surprises in every chapter.” — Library Journal

“Full of heart and intrigue, the authors' latest collaboration captures women's perseverance and how history connects us all.” — Booklist

“For most people, staying at a grand hotel is a rare treat. It’s a time to indulge in luxury, to be catered to with impeccable service and to forget about the outside world until check-out. It’s not unlike the experience a reader gets when reading All the Ways We Said Goodbye.” — The Atlanta Journal-Constitution

“An elegantly scripted and multi-layered novel that showcases the three co-author's impressive literary skills with narrative driven storytelling, All the Ways We Said Goodbye . . . is an inherently fascinating, multi-generational read from beginning to end.” — Midwest Book Review

“Three historical fiction powerhouses combine efforts to create an enthralling adventure spanning from the onset of World War I to the 1960s, telling the story of three women and their stay at the famous Ritz Hotel in Paris.” — Book Riot

“Well-researched and cohesively written, this historical novel reflects the strength of these women as they struggle to survive during turbulent times.” — Orange County Register

"This triumvirate of historical fiction writers team up once again to tell the stories of three very different women whose lives intertwine across the decades in Paris’ legendary Ritz Hotel." — The Palm Beach Post