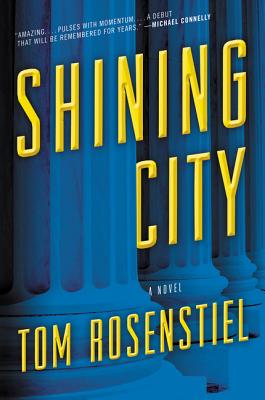 By Tom Rosenstiel
$15.99
On Our Shelves Now - Please call to confirm stock for hot titles

A polished and gripping political debut that Michael Connelly calls “an edge of your seat thriller,” Shining City is set in DC amid a harrowing Supreme Court nomination fight.

“Amazing. . . . Pulses with momentum. . . . A debut that will be remembered for years.” —Michael Connelly

Peter Rena is a “fixer.” He and his partner, Randi Brooks, earn their living making the problems of the powerful disappear. They get their biggest job yet when the White House hires them to vet the president’s nominee for the Supreme Court. Judge Roland Madison is a legal giant, but he’s a political maverick, with views that might make the already tricky confirmation process even more difficult. Rena and his team go full-bore to cover every inch of the judge’s past, while the competing factions of Washington D.C. mobilize with frightening intensity: ambitious senators, garrulous journalists, and wily power players on both sides of the aisle.

All of that becomes background when a string of seemingly random killings overlaps with Rena’s investigation, with Judge Madison a possible target. Racing against the clock to keep his nominee safe, the President satisfied, and the political wolves at bay, Rena learns just how dangerous Washington’s obsession with power—how to get it and how to keep it—can be.

Tom Rosenstiel is the author of eleven books, four of which are novels. His nonfiction is focused on politics and media, and he is recognized as one of the leading thinkers in the country in the future of media. His book The Elements of Journalism, now in its fourth edition, has been translated into more than 25 languages. Tom is the executive director of the American Press Institute in Washington, D.C. and the former founder and director of the media research unit at Pew Research Center, which he directed for 16 years. He was the press critic of the Los Angeles Times for a decade and is a non-resident senior fellow at the Brookings Institution in Washington. He lives in Chevy Chase Maryland with his wife, Rima.

“Skillful and memorable. . . . ‘Shining City’ has the excitement of a courtroom thriller [and] of a police procedural. . . . Its hero’s ruminations on politics as the art of the possible give readers much to ponder.”
— Wall Street Journal

“One of the smartest thrillers in recent memory. . . . With its slam-bang pace, richly drawn characters and intricate examination of political skullduggery, Shining City is more than a thrilling adventure - it’s a hard look at how and why Washington so often falls short of its hilltop ideal.”
— Dallas Morning News

“[A] smart new political thriller. . . . Rosenstiel writes well, sometimes even beautifully. . . . In an era of alternative facts, when notions of verifiable truth are under assault, [Shining City] reads like something that should be chipped into stone somewhere in Washington.”
— The Boston Globe

“[Rosenstiel’s] experience in Washington helps create a very realistic, though often cynical, view of what Washington is like. Perhaps the best measure of his first novel is that it will leave many readers eager to see what comes next.”
— Associated Press

“Rosenstiel’s insights on DC are spot on, told with a reporter’s sparing prose.”
— Los Angeles Review of Books

“Veteran journalist Rosenstiel’s debut novel ‘shines’ with page-turning intensity that will make readers hope that this book is the beginning of a new series. Highly recommended for legal and political thriller junkies and fans of David Baldacci and John Grisham.”
— Library Journal, Starred Review

“A roof-rattling thriller. . . . What’s really fun is watching [Rosenstiel] drop insights about the Kabuki world of the nation’s capital. . . . Give this one to fans of the late, great Ross Thomas.”
— Booklist

“[A] polished, entertaining political thriller. . . . Rosenstiel does a brilliant job dramatizing how Washington’s political sausage is made. . . . Readers will want to see a lot more of Rena and Brooks.”
— Publishers Weekly

“Shining City is an amazing novel full of insider knowledge and insights. Combine that with a plot that pulses with the momentum of an edge-of-your-seat thriller and Tom Rosenstiel delivers a debut that will be remembered for years.”
— Michael Connelly

“I loved Shining City and will share with DC insiders and friends far away from the Beltway.”
— Nicolle Wallace, former White House communications director and author of Madam President

“Shining City is a smart, timely thriller that sends chills up your spine while capturing the verisimilitude of a ripped-from-the-headlines Supreme Court nomination process. Tom Rosenstiel is a writer to watch.”
— Alafair Burke, author of The Ex

“At once gripping, cerebral, and eerily prescient, Tom Rosenstiel’s Shining City illuminates the darkest recesses of D.C.’s corridors of power. Rosenstiel’s political machinations ring so true, you’ll wonder if he has the White House wired for sound.”
— Chris Holm, author of The Killing Kind

“If they’d asked John Grisham to pen a season of House of Cards (not a bad idea, by the way), it would play like Shining City. Tough, smart, nuanced and with a hammer pace, Rosenstiel’s debut offers an insider’s tour of the puzzle palace that is Washington D.C.”
— Michael Harvey, author of Brighton

“Shining City couldn’t possibly be any more timely. Rosenstiel takes us behind the headlines as only as insider can with this first-rate tale of political intrigue and maneuvering. It’s so packed with authentic Washington detail you can almost feel the humidity.”
— Matthew Quirk, author of The 500 and Cold Barrel Zero

“Tom Rosenstiel takes readers behind the clichés and curtains of Washington power politics . . . This is a fascinating novel about how justice is shaped in the United States that couldn’t be more timely.”
— James Grady, author of Six Days of the Condor and Last Days of the Condor