My Dear Hamilton: A Novel of Eliza Schuyler Hamilton (Paperback) 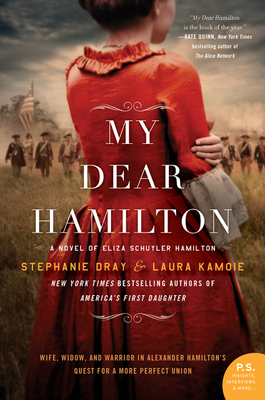 "An edge-of my sear immersion into historical events...No study of Alexander Hamilton would be complete without reading this book." —Karen White, New York Times bestselling author

Wife, Widow, and Warrior in Alexander Hamilton’s quest for a more perfect union

From the New York Times bestselling authors of America’s First Daughter comes the epic story of Eliza Schuyler Hamilton—a revolutionary woman who, like her new nation, struggled to define herself in the wake of war, betrayal, and tragedy. Perfect for fans of Ron Chernow's biography Alexander Hamilton and fans of Lin-Manuel Miranda's Hamilton: the Musical.

In this haunting, moving, and beautifully written novel, Dray and Kamoie used thousands of letters and original sources to tell Eliza’s story as it’s never been told before—not just as the wronged wife at the center of a political sex scandal—but also as a founding mother who shaped an American legacy in her own right.

Coming of age on the perilous frontier of revolutionary New York, Elizabeth Schuyler champions the fight for independence. And when she meets Alexander Hamilton, Washington’s penniless but passionate aide-de-camp, she’s captivated by the young officer’s charisma and brilliance. They fall in love, despite Hamilton’s bastard birth and the uncertainties of war.

But the union they create—in their marriage and the new nation—is far from perfect. From glittering inaugural balls to bloody street riots, the Hamiltons are at the center of it all—including the political treachery of America’s first sex scandal, which forces Eliza to struggle through heartbreak and betrayal to find forgiveness.

The last surviving light of the Revolution…

When a duel destroys Eliza’s hard-won peace, the grieving widow fights her husband’s enemies to preserve Alexander’s legacy. But long-buried secrets threaten everything Eliza believes about her marriage and her own legacy. Questioning her tireless devotion to the man and country that have broken her heart, she’s left with one last battle—to understand the flawed man she married and imperfect union he could never have created without her…

Stephanie Dray is a New York Times, Wall Street Journal & USA Today bestselling author of historical women’s fiction. Her award-winning work has been translated into eight languages and tops lists for the most anticipated reads of the year. Before she became a novelist, she was a lawyer and a teacher. Now she lives near the nation’s capital with her husband, cats, and history books.

Laura Kamoie is the New York Times, Wall Street Journal, and USA Today bestselling author of historical fiction. She holds a doctoral degree in early American history from The College of William and Mary, published two non-fiction books on early America, and most recently held the position of Associate Professor of History at the U.S. Naval Academy before transitioning to a full-time career writing fiction. Laura lives among the colonial charm of Annapolis, Maryland, with her husband and two daughters.

“Following their stunning success in America’s First Daughter, Stephanie Dray and Laura Kamois have penned an unforgettable story of the woman behind Hamilton [...] My Dear Hamilton is a masterpiece that is both intimate in detail and epic in scope—a triumph!”   — Pam Jenoff, New York Times bestselling author of The Orphan’s Tale

“Eliza Hamilton assumes her rightful place as one of America’s founding mothers as she guides first her husband and then her fledgling nation into the annals of history. My Dear Hamilton is historical fiction at its most addictive!” — Stephanie Thornton, author of The Tiger Queens

“Not since I read Erik Larson’s Dead Wake have I had such an edge-of-my-seat immersion into historical events.  Eliza Hamilton is a remarkable heroine, depicted here with gorgeous prose and heart-tugging realism. No study of Alexander Hamilton would be complete without reading this book and learning the true source of the great man’s strength—his wife.  Full of history, engaging characters who shimmer on each page, and a tremendous love story, this is a book for everyone.” — Karen White, New York Times bestselling author

“An incredible, surprising, and altogether lovely tribute to the woman who stood beside one of the most unknowable, irascible, energetic, and passionate men wo contributed to the foundation of this nation.” — Lars Hedbor, author of The Path: Tales from a Revolution

“My Dear Hamilton is a superbly written, meticulously researched homage to the birth of America [...] At once a wartime drama, a woman’s coming of age, and a lesson on politics that resonates in today’s world, My Dear Hamilton is the book of the year.” — Kate Quinn, USA Today bestselling author of The Alice Network

“My Dear Hamilton is a fascinating work of historical fiction, beautifully crafted and richly detailed. If you think you already know Eliza Schuyler Hamilton, her role in the founding of our country, her marriage, and her heartbreak, you’ll marvel at the woman you meet in this compelling novel.” — Jennifer Chiaverini, New York Times bestselling author of Mrs. Lincoln’s Dressmaker and Enchantress of Numbers

“Beautifully written and meticulously researched, this stunning novel captures the courage, strength, and kindness of the remarkable woman behind Alexander Hamilton. A fascinating read!” — Ellen Marie Wiseman, international bestselling author of The Life She Was Given

“If you’ve ever wanted to banter with Hamilton or share a dish of tea with the Marquis de Lafayette, open the covers of My Dear Hamiltonand step right in to Eliza Hamilton’s parlor [...] The gang’s all there!” — Lauren Willig, New York Times bestselling author of The English Wife

“Through Eliza’s eyes we are treated to an in-depth portrait of Hamilton, not to mention forward-looking psychoanalysis of his genius and personality defects.” — Kirkus Reviews

“My Dear Hamilton is both an intimate portrayal of the strength, courage, and grace of one of our nation’s founding mothers and the engrossing saga of the birth of a country. Richly detailed, beautifully written, and impressive in its scope and heart, this is historical fiction at its best!” — Chanel Cleeton, author of Next Year in Havana

“This entertaining blend of romance, fictional biography, and history will be in suitably high demand.” — Booklist

“Stephanie Dray and Laura Kamoie weave such an enchanting spell with their take on the life of Eliza Hamilton [...] An excellent experience, a festival for the mind and heart, this is a true gem that’s worth every cent and every second spent upon it.” — All About Romance

“Dray and Kamoie have written a book that stands as a real tribute to Eliza, one of America’s founding women. Their research has rewarded the reader with a truly immersive read.” — Historical Novels Review

“The historical fiction dream team does it again with the wife of Hamilton...Haunting, moving, and beautifully written, Dray and Kamoie used thousands of letters and original sources to tell Eliza’s story as it’s never been told before...” — Fresh Fiction