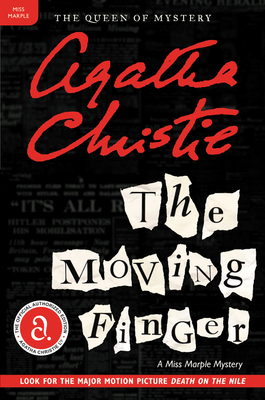 By Agatha Christie
$15.99
This title is likely Out of Print or otherwise unavailable

This is book number 4 in the Miss Marple Mysteries series.

In this exclusive authorized edition from the Queen of Mystery, the indomitable sleuth Miss Marple is led to a small town with shameful secrets.

Lymstock is a town with more than its share of scandalous secrets—a town where even a sudden outbreak of anonymous hate mail causes only a minor stir.

But all that changes when one of the recipients, Mrs. Symmington, commits suicide. Her final note says “I can’t go on,” but Miss Marple questions the coroner’s verdict of suicide. Soon nobody is sure of anyone—as secrets stop being shameful and start becoming deadly.

“Agatha Christie is in a class by herself. For those of us who write mysteries, there’s no better muse, and for those of us who read them, no deeper pleasure.”
— Mary Jane Clark, New York Times bestselling author

“Beyond all doubt the puzzle in The Moving Finger is fit for experts.”
— The Times (London)